Mercer County Farm Bureau donated $3,000 to the Kendyl & Friends Playground.  This playground is for special needs children to be able to play just like everyone else.  It is named after Kendyl Claycomb who contracted meningitis when she was less than 1 month old. Her mother Crimson wanted her to be able to play just like all other children but the closest special needs playground is in Pikeville KY.  Crimson applied for a grant for playground equipment and was awarded over $36,000 in playground equipment,  but the stipulation was that she had to have the money for the rest of it which was almost $250,000 by the end of 2016 or the grant would be rescinded and the price would go up for the rest of the equipment.  The city of Harrodsburg along with local businesses and people came together and either donated money or had chili suppers, yard sales etc. to raise the rest of the money. 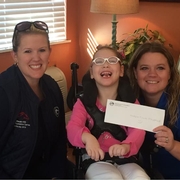 The American Farm Bureau Federation presented awards to state Farm Bureaus at the organization’s 104th Convention. The awards recognize excellence in implementation of outstanding member programs and membership achievement in 2022.

Candid Conversation presents a discussion about the topical issues related to KFB priorities, the agricultural industry, and rural communities. In this column, Kentucky Department of Fish and Wildlife Resources Commissioner Rich Storm discusses the mission of the department and how it can be of assistance to more than just those who like to hunt and fish.