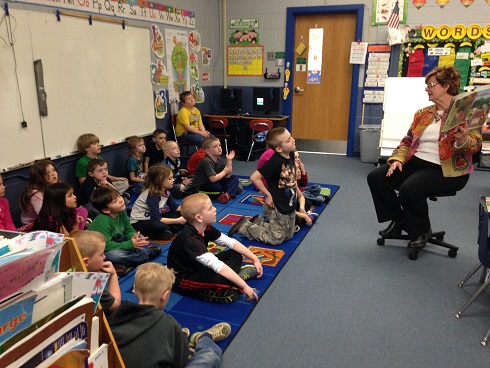 March 15-21, 2015, was Kentucky Ag Literacy week. To celebrate, members of the Lincoln County Farm Bureau Women’s Committee went to each of the elementary schools and read to a class from Kindergarten to 2nd grade. The book they read was called "The Apple Orchard Riddle" by Margaret McNamara and illustrated by G. Brian Karnes. Each committee member did an activity with the class. At Waynesburg Elementary, students were given slices of red, yellow, and green apples to taste. They were then asked to stand at a spot in the room that showed which apple they liked best. They talked about how people are different, just like apples are different. An apple was cut to show them the star in the middle. They were reminded of the riddle to share with their parents. The book and educator’s guide was donated to the school.

American Farm Bureau Federation President Zippy Duvall today met with Tatiana Clouthier, Mexico’s Secretary of the Economy, and Esteban Moctezuma Barragón, Mexico’s Ambassador to the U.S., to discuss a variety of trade matters, the use of technology to advance agriculture and the border crisis. Mexico is the third largest destination for U.S. agricultural exports.