The Women’s Committee of Henderson County Farm Bureau Chair and Co-Chair, Alice Skaggs and Brenda Williams, presented a check for $650 to the Henderson County Fire Department.  The funds will be used to place “Stop-the-Bleed” kits in the schools.  It is the hope that they will never have to be used; but available in the possibility of a school tragedy. 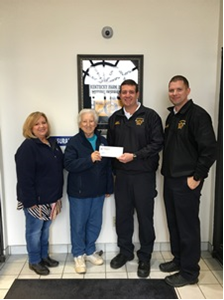