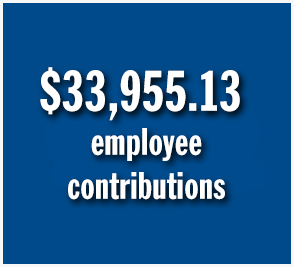 Kentucky Farm Bureau Mutual Insurance Company employee contributions to the Metro United Way totaled $33,955.13 in 2016. This is the 48th year our employees have donated funds to the campaign, and those contributions have increased annually for the past three years.

Every fall, KFB Insurance employees are presented with the opportunity to give back to local communities via an automatically deducted donation from their paychecks.  In 2016, 187 employees participated in this program.

For almost 20 years, KFB Insurance has also hosted a silent auction to benefit the Metro United Way. Individuals, and sometimes entire departments, donate items which are then auctioned off at the KFB Insurance State Office. In 2016, staff members brought in and auctioned off 62 items, equaling more than $2,500 in contributions.

Because of this partnership with the Metro United Way, KFB Insurance is able to give back to the communities surrounding its state headquarters.  All contributions go to carefully selected charities in Bullitt, Jefferson, Oldham and Shelby counties in Kentucky and Clark, Floyd and Harrison counties in southern Indiana.